UNEP is supporting low- and middle-income countries to develop policies and projects to promote low- and zero-emissions transportation. Through the Global Fuel Economy Initiative, where UNEP is one of the founding partners, UNEP is supporting countries to promote zero carbon vehicles by 2050. This report aims to describe the state and policies on road transport in Pakistan including an assessment of the fuel economy baseline of vehicles in the country, and provide the basis support the country’s efforts to promote more efficient vehicles and electric mobility.

Pakistan is the fifth most populous country of the world. According to the Census-2017, population of Pakistan is 207.8 million; of which 43.2% belong to urban areas and 56.8% living in rural areas. The population density is 265 per km2. The economy of Pakistan has three main sectors; agriculture, industry and services. Agriculture contributes 19.3%; manufacturing sector 19.29% and services sector 61.4% to the GDP.

Pakistan has a road network of 493,088 km length that includes national & provincial highways, motorways, expressways, strategic roads, district & rural roads. The road network is significantly increasing with the construction of the new economic connectivity projects under the China Pakistan Economic Corridor (CPEC). An effective and efficient transport sector is the backbone of the economy which plays a catalytic role in the industrial growth viz-a-viz access to the public. About 170 million vehicles of all categories ply on the roads which use fossil fuels (gasoline, diesel & compressed natural gas (CNG)) as the base energy for their operations. The transport sector relies mainly on fossil fuels and is one of the contributors of CO2 emissions and air pollutants going beyond the prescribed limits of NEQs ambient air quality standards and becoming a major source of greenhouse gasses. Despite having regulatory frameworks, there is scanty implementation of the control and monitoring of vehicle exhausts. Hence, rationalized energy consumption is becoming an increasing priority just to combat environmental degradation and meet international climate commitments.

The Government launched the Eco-system Restoration Initiative (ESRI) in Dec, 2019 with the funding support of $188 million from the World Bank for facilitating the transition towards environmentally resilient Pakistan by mainstreaming adaptation and mitigation within the framework of the Pakistan’s Nationally Determined Contributions (NDC) submitted to UNFCCC. Strengthening of Measurement, Reporting and Verification (MRV) and GHG Emission Inventory System has been developed in the Global Change Impact Studies Centre (GCISC) of Pakistan. Besides, the National Committee on Establishment of Carbon Market (NCEC) was established in Dec 2019.

The Committee is tasked with assessing the role and scope of carbon markets in delivering Pakistan’s NDC and identifying opportunities and challenges to improving emission data. The Committee advise concerned organizations on different matters pertaining to the carbon market and its considerations into the NDC. Industrial development is governed by policy frameworks to encourage more efficient use of energy, effective development and utilization of transportation to achieve objectives of energy-transport relationship to reduce emissions. Pakistan, cognizant of the situation have formulated sectoral policies and regulatory frameworks to regulate CO2 and allied emissions to control and mitigate adverse effects of climate change in the country. National Policies on Transport, Energy, and Climate Change focus on reduction, capture, mitigation of greenhouse gasses emissions and reduction of CO2 emission impact of vehicles on the environment and its associated costs. Advancing towards “No Emission Vehicles” Pakistan has approved the National Electric Vehicle Policy (NEVP) in August 2020, targeting the shift of two-three wheelers and Light-Duty Vehicles (LDVs) by 50% up to 2030 and 90% by 2040. The heavy-commercial vehicles (HCVs) would shift by 30% production/import/sale in 2030 and 90% by 2040. The NEV Policy has offered special incentives, tax holiday and minimal procedural process to the manufactures, assemblers, suppliers and importers.

The use of energy in the transport sector increased by 7% viz-a-viz the number of two/three wheelers, which increased by 23% during 2005-19. However, the number of LDVs and HCVs, on road, dropped by 17% and 3% respectively in the same period. The increasing trend in two/three wheelers show a cheaper transportation mode suitable for short intracity routes/distances and as all-weather vehicles for rural areas. The aggregate number of cars/jeeps/station wagons/ motor cabs etc. constitute 31% of the registered vehicles in 2005 which declined to 14% in 2019. The decline is due to higher prices of vehicles and rising petroleum prices as the government levy taxes on gasoline (a major source of income of the government) and less chances of adequate commercial opportunities for livelihood earning on sustainable basis. The automobile industry in Pakistan has been growing with the introduction of incentives offered under the Automotive Development Policy 2016. However, concurrent import of vehicles (new and used/reconditioned) supplemented the national transport requirements; the market survey indicates that 50% of the imported vehicles are used/reconditioned, mainly two/three wheelers, cars, pickups and passenger vehicles.

Pakistan has no regulatory framework regulating the efficiency of vehicles, determining of operational age of vehicle/ vehicle retirement age and scrapping of outlived vehicles. As a result, there are vehicles on the road of different models, makes, engine capacities & technologies having excessive CO2 emissions and incompatible in complying with the existing vehicle emission standards. The average vehicle age in Pakistan has been determined as 11.3 years. In the baseline study, the average vehicle age is comparable to India where vehicle age is more than 15 years. Vehicles more than 15 years must be re-registered unless the vehicle still meet operational standards. The passenger cars in Pakistan were fairly inefficient with a fleet emission intensity estimated at 185gCO2e/km in 2013 using gasoline as fuel. The natural gas vehicles have comparatively less GHG emissions intensity of 166 gCO2e/km.

The GHG emissions in transport sector account for 51.3 MTCO2-eq in 2018 which is 23% of the total MTCO2 -eq emissions of energy sectors and 10% of the total GHGs emissions during 2018. The transport sector shared 39% energy consumption in 2017-18 against 32% in 2012-13 with a growth of 6% in this period. The Annual Compound Growth Rate (ACGR) of energy consumption during 2005-2018 was 8%. The Compound Annual Growth Rate (CAGR) of GHG emissions data of CO2 has shown reduction in this period which implied better fuel efficiency and less emissions. 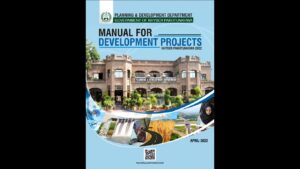 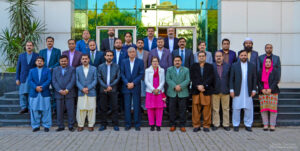 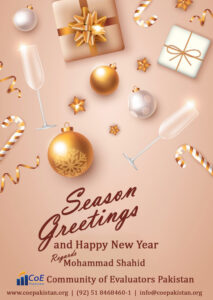 submit your email for the newsletter.

CoE-Pakistan is a group of development planners and M&E professionals for sharing knowledge and experiences in the field of planning, development administration, performance auditing, monitoring and evaluation. The Government of Pakistan has accorded priority to accountability and outcome results. It has therefore been decided to prioritize results-based monitoring and evaluation of policies, programs, and projects. CoE-Pakistan focuses on institutionalization of the results chain in the development process through different initiatives including training and capacity building of the public & private organizations, communities and NGOs in collaboration with national and international partners, donors and organizations.